Nick was baptized in December 2022. If you have interest in getting baptized at Hope Community Church, you can learn more by visiting hopecc.com/baptism.

Growing up, I would say that I was “raised to be Christian” – I went to church on Sunday, youth group on Wednesday, prayed most nights before bed with my family, and generally lived a life that attempted to be ethically consistent with the teachings of the Bible. Internally, though, my actual relationship with God was conflicted. On the one hand, I generally was okay with the idea of “being a Christian”, feeling like it was the right path to follow, and I also was decently self-motivated to engage with the practices of my faith. However, I also carried within me doubts about the existence and attributes of God that I almost entirely ignored, and found that much of my religious behavior was motivated by it being “correct”.

As I’m writing this, I’m finding it difficult to succinctly describe my faith growing up. The reality is that it is hard to describe, and was filled with moments where I went to God out of ritual, out of need, or out of some sense of genuine relationship, as well as times where my faith was effectively empty religion. As a whole though, I found it difficult to integrate my faith into many aspects of my life, and so as I graduated high school, my life was primarily motivated by my hobbies, academics, and friends, with faith largely existing as something that I vaguely knew was “more important” but that I didn’t know how to engage with outside of the times that “made sense”, such as in church or before bed in prayer.

Coming into college, I expected to continue to live life as I did in high school – finding friends who enjoyed the same things I did, and pursuing my passions with them while enjoying my schoolwork in a new, exciting environment. However, this did not become my reality, and I instead found myself struggling to develop meaningful friendships with anyone, while feeling more burdened by school than ever, during a pandemic that made doing things I enjoyed or socializing extremely difficult, making me feel even more anonymous than I already would have felt at a big school like the U of M. As I was going through these struggles the fall of my freshman year, two students from a campus ministry called the Navigators approached me and invited me to fill out a survey about interest in their organization. Mostly out of it “seeming the right thing to do”, I filled it out, and eventually got connected with a Bible study.

As an incoming freshman, Bible study was not something that was high on my priorities. I wanted to find people I was similar to who I could become friends with and spend time with, and a Christian student organization felt like something “good” but not as rewarding, and so I felt little motivation to engage. However, what I found in the Navigators was not people who were showing up out of some sort of obligation, but students who somehow desired to know Christ and share his love with others in a way I had never witnessed before. Honestly, it made me uncomfortable at first, but after a long process of getting connected (and agreeing to live with some people in the group I barely knew!), I realized what I had been missing. As I experienced the fullness of Christian community, I realized that God was not something that I should be keeping “safe” in church or in private prayer rituals. He was not some “way of living” to follow because it was “better”, but he was the Creator of all that I cared about, and deserved my full attention and love because He gave me his full attention and love. And in Him, I didn’t need to hide from doubt or fear anymore, but I could confidently place Him as my source of worth, security, and identity, where previously I had placed my passions, academics, or personal relationships. In many ways, I realized that all of my life, even as a “Christian”, I had been looking to the world for life and worth, and it always fell short – my experiences freshman year painfully reminded me of that. But as I allowed myself to enter into the community of the Navigators and learn from them, I found that the real source of life and worth had been with me the whole time in Jesus. How revolutionary that was!

Since my freshman year, I have continued to grow in my faith and walk with Christ while also experiencing newer and harder challenges that have forced me to acknowledge my weaknesses and truly worship God, putting my hope in Him and not my ability to follow Him or serve Him. Hope Community has been an integral part of this process of growth, and I am now happy to consider it my church home in this season of my life, having first been connected with it in the winter of my freshman year. A notable challenge I’ve had to face has been in the realm of mental health, and I’ve had to confront realities about the anxieties that I face that seem to be embedded into the core of who I am, tracing them back sometimes as far as to the doubts I originally had growing up. It’s been hard, but in that process, God has continued to be faithful, and while I am far from healed in the area of anxiety (and recognize that this will likely be a lifelong struggle), I know that God is with me and is walking with me in this and all areas.

This, really, is where I found myself as I decided to get baptized. I’m getting baptized because I love Jesus and want to follow Him and serve Him wholeheartedly for the rest of my life, but more than that, because I deeply, deeply need Him. Even when so many things feel uncertain, I know that I can rely on Him, and so in baptism, I want to declare that to myself and to the world – that Jesus has taken a hold of me and won’t let go, and that I don’t want to let go of Him, no matter what.

Matthew 11:28-30 is a significant verse to me, as it shows me Christ’s heart towards me as I struggle with feelings of falling short, pressure, and not doing enough. I love that I can just come to Him, even as I “labor and am heavy-laden”, and trust that he will give me rest. 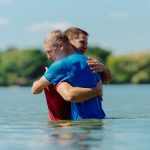 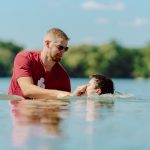